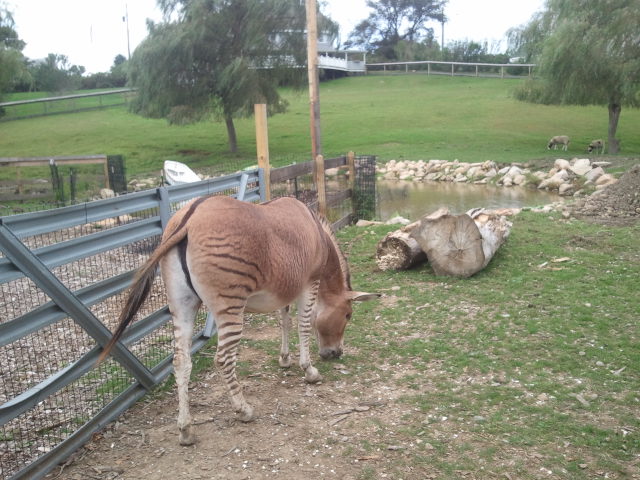 After checking in at the Hotel Manisses we decided to go and see if there was anything left of the wine and hors d’oeuvre hour a short walk up the street at the 1661 Inn. Stepping out the back door to walk up the hill towards the inn we came across, a giant turkey – no, that’s not right, it had to be something that escaped from a Doctor Seuss book I think, or maybe some sort of strange mutated creature only known to this island.  Obviously I’m wrong, and it’s pretty blatant that I haven’t kept up with the Discovery Channel because I later learned this was an Emu, yes an Emu, what the $%#@ is that? 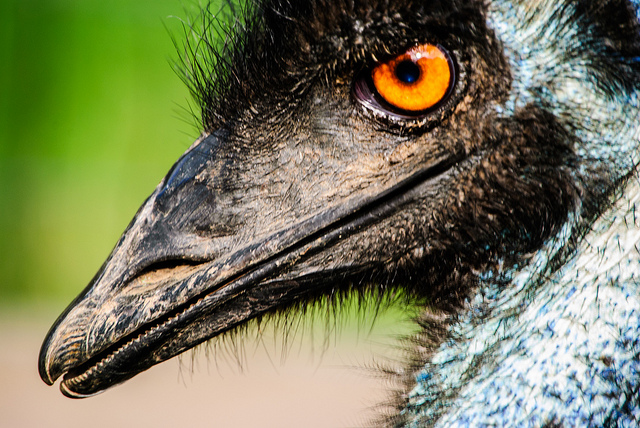 Exactly. Well I soon realized that I hadn’t stepped into a Chernobyl version  of an Orwell story, but had instead stumbled across Abrams Animal Farm filled with exotic animals. It was quite steadying to realize this wasn’t some strange vision. There was lightning fast kangaroos doing laps of the barnyard and a Zeedonk (a donkey zebra mix). You may think I’m making this up, but nope, I’ve got the picture to prove it; also spotted was a lumbering Yak that seemed to be content with its city of flies upon its back and gave us quite a nice brown toothed smile! Of the other not-so-wild-life, there was a caged area that held monkeys with racoon-like tails, I believe these are called Lemurs, a herd of llamas seemed to rule this playground by sheer numbers, some camels that I could have sworn I saw light a cigarette and a lettuce chewing tortoise named “Tank”.  There was many more animals as well, creating a sort of Block Island safari. Unfortunately we missed the afternoon wine hour after all but the inns staff were happy to provide us with wine and coffee as well as a fabulous first impression of island hospitality.

For dinner I strolled down to the Old Harbor, passing Victorian buildings filled with shops and hotels until I settled on eating at the National Hotel on a recommendation. The evening was warm and the air salty so I sat out on the deck facing the harbor to enjoy the meal.  Not being big on seafood I had a cheeseburger and a delicious bruschetta. The setting and atmosphere was both relaxed and lively, the cheeseburger tasty but not special, the bill a bit scary but having to import everything understandable.  Overall worth it to relax with decent cuisine and a charming view.

The first stop on my fast version of the Block Island tour provided by, well, my mom, was a beach at the bottom of the Mohegan Bluffs, down many, many, many flights of stairs. Of course I lept down with the greatest of agility, but coming back up those stairs though…agile definitely isn’t a word I’d use for that.  At the bottom is a perfectly sanded beach with amazing cliffs high above the coastline.   It’s a spectacular sight not just for its beauty, but for the fact that there are hundreds of stone cairns along the beach. I didn’t find out if there is a tradition behind this – you know what they say about curiosity and the cat. I just took it for what it was worth a mix of natural elegance and travelers’ footprints displayed through stacks of stone. 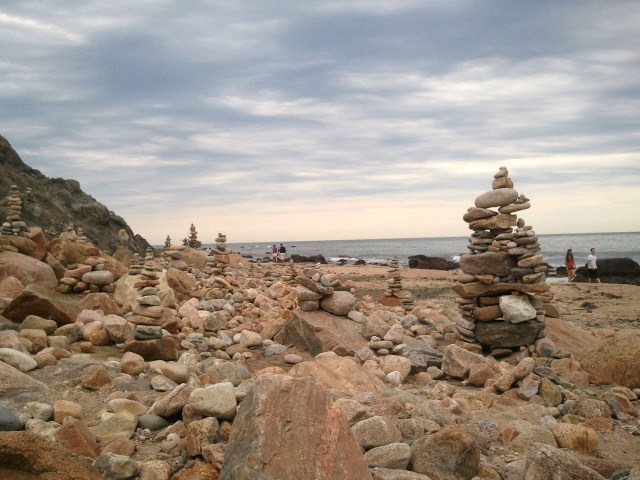 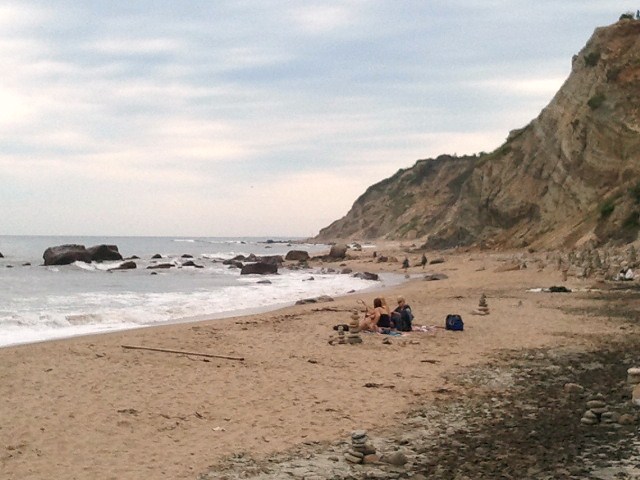 Next stop, the side of the road and an sickbag! Kidding! But those small country roads have a few twists and turns and should probably not be viewed with a map in your lap if you’re prone to car sickness.  I passed a brick lighthouse, old stone walls, country style cottages and more sandy beaches. I pulled into the New Harbor, which is newer than the Old Harbor one would assume. There, afternoon coffee was savored outside while admiring the last of the summer’s sun.  After that I continued the tour up the coast to Settler’s Rock, commemorating Block Island’s first settlers in 1661 and a view of another magnificent lighthouse. I didn’t get the chance to take a stroll out to it due to the lateness of the day by this point but even from a distance it gave off that perfect New England coastal elegance. 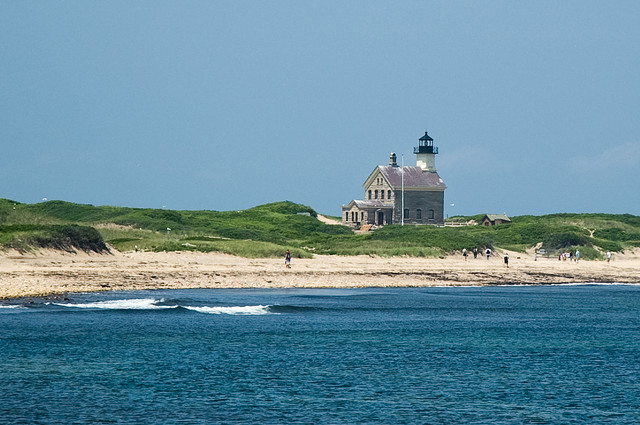 Although time seems of little consequence here on Block Island, like the great Wonka said “Got to go forwards to go back” so we press on to our next stop for the night.  The Island Home is a welcoming bed and breakfast located near the New Harbor.  Dave Chieffo, owner and host, has made this home and carriage house into a newer model of the country-style B & B. In the room named Daylily, crisp wallpaper and bright white paint adorned the walls, with a private deck off of one side. The front door led into the community courtyard, where there were tables and chairs plus a grill for all to use. The bay window in my bedroom looked out onto a green and picturesque hill which made for a grand sunset later that evening. 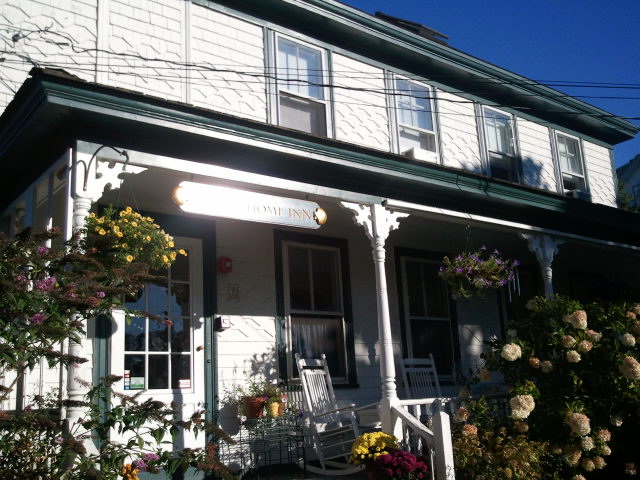 After dumping the bags in the room we set off with beach chairs, cold drinks, snacks and towels in hand to Mansion Beach. Relaxing in the not-so-hot September sun, I finally managed to gain enough courage to dive into the ocean adjusting quickly to the cooler temperature.  What I didn’t quickly get used to was how bone chilling cold I would be once I made my escape from the waves. My mother and I (the only ones of our party of 4 to swim) decided that it would be a good time to make our leave, as they say, and we packed up and headed back to warm reception of The Island Homes complimentary afternoon offerings.  I settled up for a cup of hot coffee and some tantalizing ranch dip with veggies.

Later that evening we sat in the courtyard, grilled and ate as the sun set and with it the last days of the summer. The night had gotten cool, but good food and good company warmed me as well as a sweatshirt and a pair of jeans. Hours of conversation, a quick trip to Aldo’s bakery downtown for magnificent eclairs and cupcakes ended a memorable day on Block Island. We awoke to strong fresh coffee and soon after I went to the ferry terminal with my mom to greet my brother who was coming out for the weekend. Back at the inn the smell of a breakfast of eggs, bacon, toast and fruit awoke the senses. I could get used to having a full cooked breakfast every morning, I might need to get a bigger pant size but it’d be worth it. After packing my bags and loading up the car I took off into town, for a last stroll around the Old Harbor shops and some quick souvenir shopping.  Although Block island retains its past in its architecture, culture and vibe it was time for me to catch the ferry back to the mainland.  I did so with regret, wishing my stay could have been longer but as the ferry pulled out of port I left Block Island and with it the dregs of summer to the mainland and the welcoming start of a New England autumn.